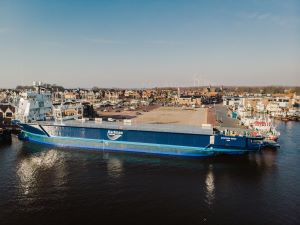 Ocean Choice recently took its next step in conquering the world. This Canadian company has chosen Urk, the fish centre of Europe in the province of Flevoland, as its location to further develop the European market.

The Nova Scotia-based company covers the entire supply chain, from fishing with its own fleet in the Atlantic waters on Canada’s east coast to delivering the final products to the wholesalers or supermarkets in America, Europe and the Far East.

The choice for Urk was clear from the beginning. The former island and its fishing community are, because of the dikes, a hundred miles from the nearest shore. This did not stop the community from growing into the hotspot in Europe for the fishing industry: catching, processing, selling and marketing fish products all over the world. Partially as a result of their high quality, expert knowledge and an outspoken business-like attitude.

With a market share of 26% of the total Dutch turnover and 23% of the total turnover of companies active in this industry (the first runner up has 8%), Urk definitely is the European centre of the fishing industry. Businesses from Japan, China, the USA and now Canada have found their way to Urk and prosper from settling there. For example Agro Merchants from the Atlanta area in the USA recently invested many millions of Euros in its facilities, to keep up with the demand.

Ocean Choice’s slogan ‘Fishing means the world to us’ connects seamlessly with the business climate of this ultra-modern fishing community.