Flevoland is the newest province in the Netherlands and the result of decades of impressive engineering. Formerly the bottom of a bay (the Zuiderzee, as the Dutch called it), Flevoland is now home to half a million residents, as well as some of the most fertile and productive arable farmland in Europe. And it’s all within an hour of Amsterdam and Schiphol Airport (not to mention 3 hours from Brussels or Cologne and 5 hours by car from Paris or Frankfurt). That’s why so many companies choose to operate in Flevoland. Companies including McCain, Sherwin-Williams, Giant, Inditex, Carnival Cruise and Yakult have all established operations here.

Good places to live
Flevoland features 6 municipalities, each with its own character, varying from a fishing village to a bustling city. Within this diversity is an abundance of affordable properties to rent or own in all shapes and sizes, plus great shopping, a massive network of cycling and hiking paths, and modern infrastructure. For international employees, Almere offers international schooling for primary and secondary students, easy transport links across the Amsterdam metro area and a vibrant community of expats from more than 80 countries. There are also language schools or clubs for Chinese, Japanese, Spanish, Polish, Hindi, Korean and many more. Many international employees also choose to live in Lelystad and Zeewolde, both characterized by their access to large recreation areas. All of this is surrounded by miles of swim beaches, more than a dozen recreational harbors, a world famous nature preserve and picturesque villages. 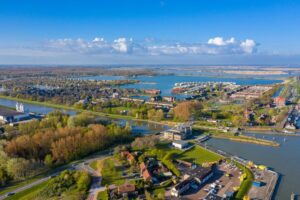 Good places to play
Flevoland is known within the Netherlands for its expansive recreational opportunities. Highlights include:

Good quality of life
Residents of the Netherlands enjoy a high quality of life and great work-life balance. In fact, the country is regularly ranked as one of the happiest countries in the world! In addition to a business-friendly economic climate, the Netherlands (and Flevoland in particular) leads global standards of living: