Ambassador Hoekstra: ‘America is open for business from Flevoland’ 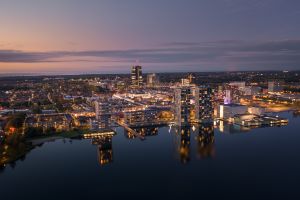 On 23 June the American Chamber of Commerce in the Netherlands, the Embassy of the United States and Horizon Flevoland organized a unique online event. A select group of international business leaders, all based in Flevoland, took part in an online roundtable with U.S. Ambassador Pete Hoekstra and AmCham program director Elke Roelant. With this roundtable Horizon Flevoland was able to connect local enterprises with American connections with each other in order to find common ground and stimulate networking.

America, one of the largest trading partners for Flevoland
The USA is one of the largest trading partners for the Netherlands. There are more than 3000 American companies with a known presence in the Netherlands and more than 1500 Dutch enterprises with operations in the USA. There are dozens of enterprises in Flevoland with American ownership and investment and many more companies have strong trade connections with America. In 2017, Flevoland-based companies exported almost ‚€100 million in goods to the USA. “The Netherlands is the 4th highest source of Foreign Direct Investments in the USA, responsible for some 850,000 jobs,”reported the ambassador. Elke Roelant added that “circa 1.5 million jobs in the Netherlands are directly or indirectly supported by FDI, for which American companies are the largest source. Foreign enterprises generate 18% of all added value in the Dutch economy and are good for 30% of all private R&D.”

“Trading Hub” as the greatest strength of the Netherlands
The topic on everyone’s mind during the conversation was: “when will the borders re-open for people and goods?”  Free movement of people and goods is crucial for businesses with strong American relationships.  Ambassador Hoekstra replied that the United States is “open for business, it’s just a little bit tougher right now” than everyone is used to.  He emphasized that America sees the European Union as their more important trading partner and that the greatest strength of the Netherlands is the country’s emphasis on being a trading center